COVID-19 Advisory: Visitor restrictions are in place for all Phoenix Children’s locations. Masks are required for all visitors and for patients ages 2+. For more information, visit our COVID-19 Resource Center.

Articles and Updates from Phoenix Children's 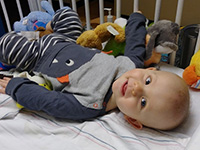 Late on the night of August 8th, 2018, Jude spiked a fever much too high for a four-month-old. Since his pediatrician’s office was closed, we took him to our local ER who told us to stop worrying about every fever, handed us a dropper of Tylenol then sent us on our way. We knew something was wrong and the ER’s response to us just didn’t feel right. So, first thing in the morning, we took him to see his pediatrician. His doctor ran every test she could but didn’t find anything wrong with him. She did, however, say she could tell that I knew something wasn’t right and that in her experience, a parent’s gut feeling is always right, so she sent us to the ER at the children’s hospital in Louisville, KY to have further testing done and to rule out meningitis. 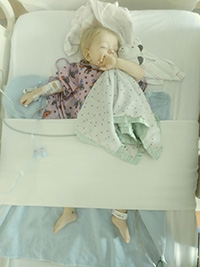 The drive took more than an hour and by the time we got there, Jude’s temperature had risen to 104°. After sitting in the ER for several hours, the doctor was about to send us home with the diagnosis of just a little virus that we should let run its course. It was then my mother-in-law, who had come with me to help with Jude and my daughter Addie, asked the doctor to look at Jude’s eyes. His right eye kept wandering and just couldn’t focus like the left one could. The doctor ordered a CT scan and said we would need to wait there for another 2 hours while they waited for the results.

After the CT scan was done, Jude’s fever broke and never returned. The doctor came in around 7pm that night and said they found a mass on the back of Jude’s right eye which they believed to be retinoblastoma. That was the first time I had ever heard of retinoblastoma and as the doctor explained it to me, I asked her how often this turned out to be cancer. 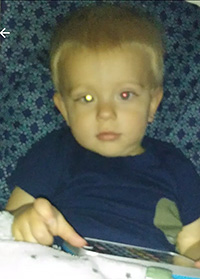 It is always cancer, she told me.

I couldn’t understand how just a virus turned so quickly into cancer. It wasn’t until the hospital’s shift change that it started to sink in, especially when the next doctor who entered the room looked me in the eye and said, “I cried before I came in here, this sucks and there is no other way to say it, your baby boy has cancer.”

In three years of my son fighting cancer, that is the most helpful thing anyone has ever said to me.

The next day, my husband and I drove Jude back into Louisville, KY, where we met Dr. Aparna Ramasubramanian (we call her Dr. Rama for short) for the first time. She examined Jude’s eyes and found he had the bilateral form of retinoblastoma, meaning the cancer was in both eyes. We learned more about retinoblastoma and started forming a treatment plan. 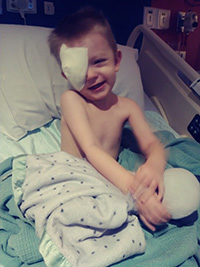 A few days later, Jude was admitted to the hospital for the first time to begin his treatments. There was so much information to process: what chemotherapies he would have, side effects of these drugs, how to keep him from getting sick and what to do if he had a fever, how to care for his broviac line (a tube with one end outside the body and the other end inserted into a vein near the heart used to administer chemo) and how to give him a shot of Neupogen (helps his blood counts recover after chemotherapy). We also learned the white/yellow glow of his pupil (rather than red) in photos with a flash was a sign of retinoblastoma.

By the time February rolled around, Jude had received 6 rounds of chemotherapy, all of which had required hospital stays. He had also been hospitalized for mouth sores that caused him not eat for several days, a torn broviac that needed to be replaced and an infection in his broviac line which caused him to spend his first Thanksgiving in the hospital. 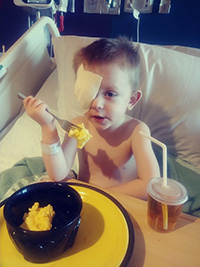 In April, 2 months of being free from chemo, Jude had his first birthday and his tumors began to grow again.

Jude would need a more aggressive treatment to stop these tumors, so we turned to localized chemotherapy, a procedure in which a catheter is inserted into his groin and snaked through his arteries and veins until it reaches his eyes where chemotherapy drugs are then administered through the catheter. He received his first round of this in Louisville but it was ineffective. At that time, Dr. Rama told us she was relocating to Phoenix and since there wasn’t anyone else in Kentucky who could treat Jude, we could either bring him to Cincinnati or fly him out to Phoenix and continue his care with her along with another doctor who was exceptional at performing the localized chemotherapy. Dr. Rama told us to go home, think about it and talk it over, but for us, there was nothing to discuss. It’s not easy to trust your kids to other people, especially when it comes to something like cancer, but Dr. Rama has always treated Jude like her own child. She genuinely cares about him, so there could be no other doctor. 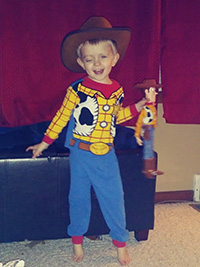 In June of 2019, Jude took the first of many trips to Phoenix. We met Phoenix Children’s radiologist, Dr. Todd Abruzzo, who would be performing the localized chemotherapy and would end up doing so many of them, I have lost count of just how many of these procedures Jude has had done. Just about every month, we would fly Jude to Phoenix with the help of Miracle Flights and stay for 3-5 days before flying back home to Kentucky. Jude would meet with Dr. Rama, have an exam under anesthesia with some laser and freezing to the tumor and sometimes a localized chemo with Dr. Abruzzo would be added in. It seemed like one month we would get good news only for it to turn to bad news the very next trip and it would continue like that for a year and half.

In December of 2020, we met with Dr. Rama for the usual exam under anesthesia and when she met with me after the procedure, the news was not good. 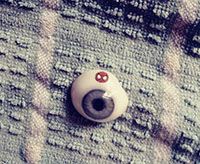 The tumors in Jude’s right eye were growing yet again. The treatments just weren’t working and by this point, he had very little vision left in the eye. We made the decision to remove the right eye and Dr. Rama arranged to have the procedure later that day. Before every procedure, I always tell Jude what the doctors are going to do and why, but I couldn’t find the words to tell him that when he woke up, he would only have one eye. I was afraid he would be scared, so he went under anesthesia for the second time that day not knowing what was in store for him. After the procedure, Dr. Rama assured me he was happier than usual when they took him back to the OR. He played games with them and seemed at peace, almost like he knew what was happening and was ok with it. Sure enough, when he awoke later that night, he smiled at me and asked, “Did my Dr. Rama throw my eye in the trash?” I told him I didn’t really know where she put it but that he wouldn’t get it back and apologized for not telling him before. His response was, “Ok, can I eat mac n cheese?” He was really 100% ok with losing his right eye. 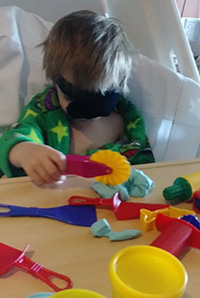 In March 2021, just a few weeks before his 3rd birthday, we took Jude to get his prosthetic eye. The ocularist who made his new eye painted a Spiderman face on the top of it which made him very happy and he now refers to his right eye as his “Spiderman eye.” After leaving the office with his new Spiderman eye, he turned to me and happily yelled, “Now I can see!”

Most recently, we flew Jude back to Phoenix and found out the tumors in his left eye were not responding to treatment in the way we would like. The next step for Jude was to have a radiation disc inserted into that eye which would take about 2 weeks to make. So far, all of Jude’s treatments in Phoenix had taken place at Phoenix Children’s Hospital, but this procedure was to take place at a different hospital on June 8th. That hospital backed out last minute, so Phoenix Children’s began arranging for Jude to have the radiation disc implantation done with them. Phoenix Children’s wasn’t licensed to perform this type of procedure, but miraculously obtained the proper certifications within just two days! We were so thankful! 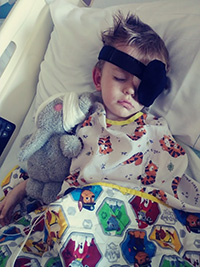 So, on June 8th, Jude and I arrived at Phoenix Children’s early in the morning to begin the procedure. Once the radiation disc was placed in the left eye, it had to patched for 3 days, and since Jude didn’t have his right eye, that meant he wasn’t able to see anything at all for 3 days. When you think of a 3-year-old suddenly unable to see for 3 whole days, it would be natural to think there would be lots of screaming, crying, and trying to tear the patch off. Not with Jude. Like with all things, Jude wasn’t bothered and adapted quickly. He never asked for me to feed him. He did it himself. He learned to tell which Hotwheels car was which by the feel of it. He even painted. For the most part, he enjoyed sitting and having me read his favorite Magic Tree House books or listening to the movie, Toy Story. 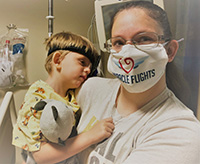 By the end of day 3, he was walking around the room without fear. For those three days, the Phoenix Children’s staff went above and beyond to make Jude comfortable and happy. He was visited by his unit’s Child Life specialists, who had already been filled in on all the things he loves by his favorite Child Life specialist from the OR. He had some incredible nurses who made sure to always introduce themselves when they entered the room and tell him what they were doing. These nurses also brought him all the cheese sticks and fruit snacks a three-year-old boy could dream of and eat. When the eye patch finally came off and the radiation disc was removed, his nurse was there to celebrate with him about all the things he could see again. 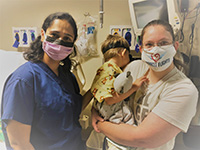 Sometimes life is scary for Jude, but he still laughs at everything. Sometimes people have to poke him with needles that make him cry, but he still says thank you to them when they are done. He may hide from his doctor when she enters the room, but when he is home, he loves to play “Dr. Rama” and tells everyone about his cool Spiderman eye. It has been a long three years with lots of treatments and traveling but Jude has remained one happy little boy with a huge sense of humor. We are extremely grateful to Dr. Rama, Dr. Abruzzo and all the nurses and child life specialists at Phoenix Children’s.

Your support is critical for us to offer expert, family-centered care.
Learn More

Keep up with the latest news from our medical experts and support teams.
Learn More

Play an important role in providing hope, healing and care for our patients.
Learn More
Back to Top